What do modern traders have in common with their medieval ancestors? Information overload!

We tend to believe that the issues that affect the day-to-day lives of traders and others who work in financial services are unique to our own time and place. In a world of skyscrapers and FinTechs…

We tend to believe that the issues that affect the day-to-day lives of traders and others who work in financial services are unique to our own time and place. In a world of skyscrapers and FinTechs, it can seem like we are at a singular moment in financial history. But in reality, some issues like remedying information overload, have been discussed for almost as long as markets and those that seek to profit from them have existed. A great example is Geoffrey Chaucer, a merchant in the City of London in the 14th century, who occasionally wrote a poem or two, when he wasn’t trading in commodities. His contemporaries feared for his well-being, because alongside his enormous library of around 60 books, he also had dozens of reports flowing to him daily. He received details on the ups and downs of trading in wine, in silk, and in gold, from all of the great exchanges of the time: Antwerp, Florence, Venice, and Constantinople. His friends, we know from surviving documents, believed all that information must be downright bad for his health. No one could process it and be able to make rational decisions.

Combine that concern with the stories about the merchants in The Canterbury Tales, and you have a picture of a very modern trader. From gossiping about colleagues who have broken regulations surrounding Forex trading, to a disdainful general public that see the great riches that these traders have generated as having being procured at the expense of ordinary hard-working Londoners, it seems that there are perennial issues faced by traders regardless of where and when they were trading.

Indeed, one wonders what those 14th century traders would have made of the information overload facing traders in the 21st century. It’s the same problem that they faced, but on a scale that they never could have imagined. There is a thriving industry trying to provide solutions to the problem of information overload in the financial markets, but it tries to deal with this perennial problem, with outdated solutions.

Existing solutions treat the documents as a whole, either by using textual search techniques to look for variations of an exact word or phrase, or coarsely tagging a document which enables them to be filtered by their semantic value. The fundamentals of both of these techniques: marking up a document, or scanning through it, would not have been unfamiliar to a 14th century reader: it is the laborious task of going through each piece of research one at a time with the digital equivalent of a highlighter in your hand.

Today, results are typically presented as a list of documents to be viewed individually. But, to be able to access the maximum amount of latent value in financial market analysis, modern traders need to be able to identify specific paragraphs that may be buried deep within multiple discrete documents. Allowing them to be found in one step and presented in context as a first-class result enhances the pre-trade decision-making process. 700 years on, that’s the value that financial research SaaS companies are capable of adding, after years of underinvestment in this sector of financial research.

Each day analysts in research departments around the world produce many high-quality publications on the financial markets.

What is the problem?

Each day, analysts in research departments around the world produce many high-quality publications on the financial markets. The size and quantity of these PDF documents makes it impossible to keep abreast of all the research produced. This presents a number of issues, both for the individual market participant, and for the organisations generating this research.

Those reading the research face an uphill struggle. They must navigate the wealth of research produced daily to identify documents containing relevant information. Only then can they begin the feat of gleaning valuable insights from individual documents.
Those writing the research face problems that directly correspond to those of the readers. They must ensure that their research stands out and identify the research that is providing the most value to their customers. These insights provide the necessary foundation to begin tailoring research to better meet the objectives of readers.

The incumbent methods of processing, understanding and surfacing research require significant time investment from the publishers and readers to deliver results of varying quality. This approach represents a systematic loss of value for market participants, where valuable insights can remain unnoticed, and opportunities missed. Research tools need to ensure that more time can be spent in understanding than in searching. The technology exists to facilitate this. Improved search capabilities that take advantage of rich Natural Language Processing and AI take the labour of extracting relevant information out of the hands of the readers, allowing them to focus on understanding the insights.

What is the solution?

There are a number of tools that, used together, can diminish the information overload. They have advantages for both the ‘buy’ and ‘sell’ side of financial research.

For those using financial research to inform their decision making, new technologies have the capacity to improve the reading experience, increase efficiency, and ensure that critical insights are found. To put it simply, we need to give every market participant the best possible chance of making the information work for them, rather than them having to work for the information.

One way of doing this is through Research Atomisation.

The amount of information available to traders and to the research teams putting high quality papers together is only going to increase.

Research Atomisation can break documents down into individual topics and themes. A single document will often cover multiple themes. Investigating any one of them requires extracting other relevant sections from a multitude of documents. The power of accessing granular parts of documents and seeing those sections one below the other cannot be underestimated. Time saving is just one of the benefits, while an increased understanding of complex topics is another. Having easy and immediate access to cross-asset and macro insights at your fingertips is every market participant’s dream.

The biggest benefit of all is the ability to receive research based one’s own personal choice of topics. For the research provider, this personalisation of research allows one to see the research produced in a whole new light with granular metrics that describe what topics are being written about and which ones are being read. This, in turn, allows research providers to respond to client requirements in near real-time. For example, meaningful use of metrics allows you to understand not only if a research paper is being read, but also which elements of the research are being engaged with. Achieving this at paragraph level ensures the capacity for improving the research is substantially increased. Producers of research can now aim to ensure that every paragraph is providing value to the reader.

Furthermore, with the growth of enhanced distribution and synonym search tools, research producers can be certain that their work isn’t being lost in clients’ inboxes. By personalising the emails to thematic topics and extracting key paragraphs to engage them, you provide what your clients want to read. With synonym search tools powered by AI, rich NLP, and buttressed with human editorial insight, excellent research will be surfaced as recommended reading alongside other pieces that cover related topics. This increases readership and therefore the impact of the research being produced.

With research being better targeted and better able to be analysed by both the buy and the sell side in this equation, information overload has met its match. Genuinely insightful tools for research producers, and incisive tools for traders mean that information can be quickly ingested and acted upon, creating a virtuous loop that improves the quality of the research being produced and the quality of the decisions made based on it. The feedback from both sides makes better decisions easier each and every time.

Research Atomisation can break documents down into individual topics and themes

What does the future hold?

It is clear that the amount of information available to traders and to the research teams putting high quality papers together is only going to increase. One of the most striking statistics to conceptualise this information overload is from an IBM study in 2017. The study estimates that of all the data generated in human history, 90% of it was created in the previous two years. This trend toward the rapid proliferation of data and of sources for analysis to be drawn from is likely to accelerate further.

The implications of this are stark. Without high-quality sophisticated research tools for sales teams and clients, it will become increasingly difficult to garner value from the amount of unstructured information available to market participants. Time spent in working to understand ever increasing amounts of data will reduce the capacity of traders to respond quickly to events.

Technology is the answer: it can turn the liability of information overload into the asset that it was always meant to be. That is the future, and the financial services sector needs help to embrace it. It is the responsibility of Fintechs to deliver that future today. 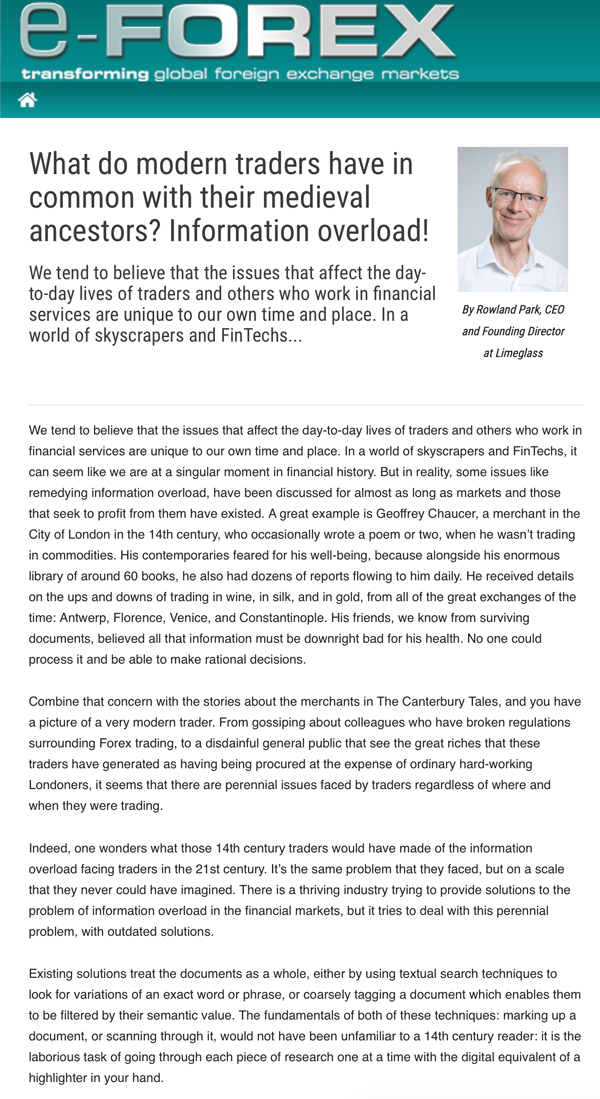 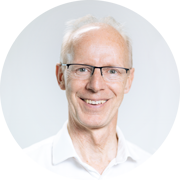 Why is it so important to address macroeconomic research?

Why is it so important to address macroeconomic research?
Scroll to top

This site uses cookies. By continuing to browse the site, you are agreeing to our use of cookies.

We may request cookies to be set on your device. We use cookies to let us know when you visit our websites, how you interact with us, to enrich your user experience, and to customize your relationship with our website.

Click on the different category headings to find out more. You can also change some of your preferences. Note that blocking some types of cookies may impact your experience on our websites and the services we are able to offer.

These cookies are strictly necessary to provide you with services available through our website and to use some of its features.

Because these cookies are strictly necessary to deliver the website, refuseing them will have impact how our site functions. You always can block or delete cookies by changing your browser settings and force blocking all cookies on this website. But this will always prompt you to accept/refuse cookies when revisiting our site.

We fully respect if you want to refuse cookies but to avoid asking you again and again kindly allow us to store a cookie for that. You are free to opt out any time or opt in for other cookies to get a better experience. If you refuse cookies we will remove all set cookies in our domain.

We provide you with a list of stored cookies on your computer in our domain so you can check what we stored. Due to security reasons we are not able to show or modify cookies from other domains. You can check these in your browser security settings.

These cookies collect information that is used either in aggregate form to help us understand how our website is being used or how effective our marketing campaigns are, or to help us customize our website and application for you in order to enhance your experience.

If you do not want that we track your visist to our site you can disable tracking in your browser here:

We also use different external services like Google Webfonts, Google Maps, and external Video providers. Since these providers may collect personal data like your IP address we allow you to block them here. Please be aware that this might heavily reduce the functionality and appearance of our site. Changes will take effect once you reload the page.